Harmolodic Monk is an album by Matt Lavelle playing by turns cornet, flugelhorn and alto clarinet and John Pietaro on vibraphone, bodhran, congas and percussion. There are 10 tracks with a total playing time of 72 minutes.

Quoting from the “Dissident Arts” website: “Harmolodic Monk” was the brainchild of noted cornet player Matt Lavelle after years of study 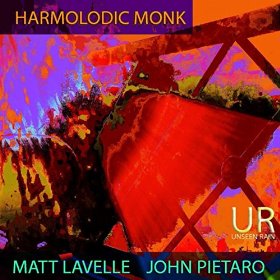 with Ornette Coleman and ongoing performance and recording with the Bern Nix Quartet. Matt came across radical vibraphonist / percussionist John Pietaro during their mutual performance with the Ras Moshe Unit and the two quickly realized that their influences weighed heavily on the brilliant compositions of Thelonious Monk and the revolutionary philosophy of Ornette Coleman. Both are also anti-purists who revel in the amalgamation of sounds, genres and styles.

Ornette Coleman was a leading light of the “Free Jazz” movement of the 1960s releasing ground breaking albums The Shape of Jazz to Come in 1959 and Free Jazz in 1960.  In 1967 Coleman won the first Guggenheim Fellowship for jazz music and his “harmolodic” theory has been employed in a range of music genres ever since and with great success at the 2009 Meltdown Festival in London where he received rave reviews.

Thelonious Monk was also seen as an adventurous musician employing unconventional techniques that other musicians found difficult, but over time his compositions have become firm favourites with generations of jazz fans across the world.

The ten tracks on this album are based on some of Thelonius Monk’s “greatest hits” and it is possible that there will be Monk fans who will react adversely to their favourite tunes being given the “Free Jazz” treatment.  Some tracks such as Round Midnight and In Walked Bud are enjoyable new arrangements of classic jazz tunes but others seem to be so far removed from the original as to be almost unrecognisable, the lack of rhythm typically provided by drums and bass giving free reign to Matt Lavelle’s and John Pietaro’s improvisations.
Matt Lavelle
photograph by Gil Selinger 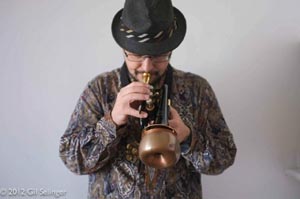 A side effect of listening to this album was the necessity to re-visit the original Monk versions of each track for comparison and noting once again what a great musician and composer Thelonius Monk was.  Another side effect was discovering the Dissident Arts website which is both interesting and unusual.  In particular there is information about the Dissident Arts Orchestra and projects including providing the musical accompaniment to classic silent films such as Battleship Potemkin and Metropolis and publishing on Youtube.

I prefer the original Monk versions of these great tunes but for those interested in “Free Jazz” and an application of Ornette Coleman’s harmolodic theories then this example will be well worth considering.

The full track listing is: Epistrophy; Pannonica; Green Chimneys; Round Midnight; Crepuscule With Nellie; Ruby, My Dear; Let’s Cool One; Blue Monk/Straight No Chaser; Monk’s Mood; In Walked Bud.  The US version of the album appears to have 2 more tracks.

SUMARI – in JAZZ NEWS from Frankfurt and Minsk