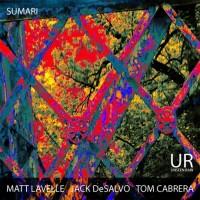 Matt Lavelle, Jack DeSalvo, Tom Cabrera – SUMARI:  If you are a fan of great improvised & fusion-oriented music, you won’t find a better recorded session than this one from June, 2015.  I’ve been reviewing these folks for many, many years now, and most strongly recommend that you lock yourself up in your sound chamber, stoke up whatever it is that “gets you in the mood”, & listen to the full hour set with your headphones on.  Songs like the marvelously intricate “The Nature of Mass Events“, though only clocking in a 2:45, are a perfect introduction to the creativity of this trio (Matt playing trumpet, cornet, flugelhorn, pocket trumpet and clarinet; Jack doing mandola, cello and guitars; and Tom on bodhran, tar, riqq, doumbak and bass drum), but the true intricacy of their performance is best heard on longer pieces (9:54) like “Scientific Cults and Private Paranoias“!

If you’re just a “regular” listener, you probably wouldn’t be here reading this anyway, but if so, prepare yourself for one of the most exciting introductions to free-style jazz you’ll ever be privileged to listen to.  As you listen to the opener, “Seth Dance”, you’ll realize that this isn’t (at all) just another “noodling” session… professional recording and tasty improvised sounds from each of the players… this is my favorite track of the seven (rather long) creations offered up for your listening pleasure, no doubt… totally accessible, even for the novice in the improvised arena.  I give this trio a MOST HIGHLY RECOMMENDED, with an “EQ” (energy quotient) rating of a (perfect) 5.00… meaning that they also get my “PICK” for “best improvised jazz”.  Get more information at the Unseen Records label page for this release. (& be sure to tell them you read about them here).          Rotcod Zzaj

There’s a majestic feeling to the opening of Solidarity, the title track of a release by Matt Lavelle’s 12 Houses. This reed-heavy 17 piece ensemble also features an extended rhythm section with guitar, piano, banjo, bass, vibes, and drums, along with violin, cello and voice. Some of the places that conductor/composer Lavelle has his unit visit are not unexpected, like saxophonists popping out of the ensemble for brash solos amid flowing and changeable backdrops. But Lavelle is a wily musical organizer who nudges the group into some unexpectedly quiet zones as well as whip them up into a frenzy like the exhilarating last minute of Solidarity. Clearly this is a man who knows well the capabilities and the sounds of the members of the unit. Brooklyn Mountain, which sounds like an excerpt from a longer performance, offers extended interplay among pianist Chris Forbes, tenor saxophone soloist Ras Moshe, and the mass of horns brought in and out of the picture via Lavelle’s conducting. Violinist Laura Ortman and cellist Gil Selinger are prominent on the ethereal but thorny Knee Braces, cushioned by thick swirls of chords from massed reeds and understated rhythms. This partly improvised tone poem is largely soothing and restful, especially when contrasted with some of the other tracks. Lavelle puts on a show for the opening two minutes of Cherry Swing, with a lengthy, cogent, and wide-ranging cornet solo over minimalist percussion accompaniment. When the full band kicks in with a wallop, Lavelle takes a second solo, playing with fiery, rapid-fire gusto. He’s followed by Jack DeSalvo with an ornery banjo solo before the ensemble pours back in to make a mighty noise. While Anaïs Maviel’s voice is usually used as part of the ensemble, her unhinged vocals on the finale, a warped New Orleans-styled collective improvisation are a bit unnerving. But a little shaking up is good for you, at least musically speaking, and if you’ve made it this far, you’ll be having too good a time with Chris Forbes’ rollicking piano and the rhythmic bounce of bass and percussion to be bothered very much. Solidarity presents an unusual big band in a variety of stylistic approaches, held together by Lavelle’s vision and his command of the possibilities of his group. Definitely worth a listen.